Review of annual Spring Play, Lord of the Flies 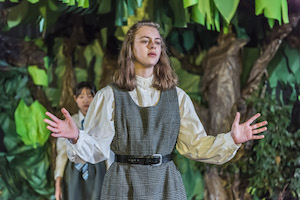 This year the ISH Performing Arts Department was proud to present its annual spring play, Lord of the Flies, written by William Golding and adapted for stage by Nigel Williams. The performance involved students from grades six to eleven and was another clear demonstration of the talent that lies within our community.

The book is a fictional story set in a time of an un-named war where a group of British school students crash land on a deserted island somewhere in the pacific. The plot demonstrates how the characters begin to lose their innocence and turn to savagery in an effort to survive.

Students were involved throughout the process in intensive rehearsals beginning in January, demonstrating their commitment and hard work under the leadership of Ms. Emma Avila Collazos and Mr. Chris Graham. Each performer skilfully acted out how humanity, in a situation of desperate hope, quickly deteriorates to horror and tragedy as they are forced to survive.

For the first time we saw the Multi-Purpose Room transformed into a black box theatre with the stage area becoming a forest and hilltop cliff. The production also involved the collaborative and professional efforts of the Tech Crew with lighting and sound.

The two performances were held on the 3rd and 4th of May; the first was open to the public and the second a matinee for open to grade 10 students for cross-curricular academic purposes. The public performance, which was very well attended, was complimented with refreshments catered by Tanzania Project students. Special thanks should go to Ms. Susan Cover who helped in organising the performers, and leading the Make-Up Crew.

Cast of Lord of the Flies